We have the first English Classic tomorrow with the 2,000 Guineas at Newmarket where the unbeaten Frankel will be a warm order. Frankel won the Greenham at Newbury but I didn’t think he was quite as impressive as I expected. He may well be a superstar and win easily tomorrow but at 8/15 he is not really backable. The Irish pair Pathfork and Roderic O’Connor are worth considering. Roderic O’Connor was beaten by Frankel at Newmarket last season but went on to win in France while Pathfork, who should relish the Newmarket mile is unbeaten. Casamento was beaten a head by Pathfork at the Curragh which was his only defeat. Fury won both his starts as a 2 year old and is a lively outsider as is Saamid who will love the ground and is too big a price at 33/1. I think you have to try and oppose the favourite and I think that Pathfork and Casimento would be the most likely to cause an upset.

Brick Red is a tentative selection in the 2.00. The ground could be a problem with him as he does not have winning form on quick ground.

Trainer James Given should have a good idea of the winner of the 2.30 as his pair of Dandino and Indian Days work together at home. I am hoping that the Elite Racing Club’s Dandino can land the spoils here.

Astrophysical Jet won 3 times last season and with ground to suit she will be hard to beat in the 3.45.

In the 4.20 Seal Rock, a winner at Doncaster on the last day of the 2010 season is an interesting runner if handling the ground.

Namibian didn’t get a clear run when 4th over course and distance at the Craven meeting and is worth another chance in the 4.55. Well Sharp drops back in trip in the 5.25 which may suit him.

Captain Carey is something of an old friend and I will stick with him in the Goodwood 4.00. King Ferdinand showed enough in his two starts last season to suggest he can win the 5.10. 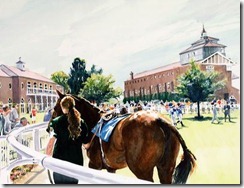 King of the Celts should come on for his recent run at Ripon and looks likely to go close in the 2.25 at Ripon. My initial thoughts on the Thirsk Hunt Cup were for Our Joe Mac but ground conditions are unlikely to favour him so I will sit this one out.

I had Jade down as one to follow this season but I am a bit surprised by her entry in the 5.15 as the 6 furlong trip looks on the short side for her. She will have to be the selection though as I am sure the trainer knows best!

My only selection at Doncaster is Spinatrix in the 6.05.

Today’s picture is courtesy of the artist Ruth Buchanan.

The most interesting race at Sandown tomorrow is the 4.25 for maiden fillies. Always the Lady, Arizona Jewel and Rien ne vas Plus all raced once last season and all showed considerable promise. Hard to pick one but I will go with Rien ne vas Plus. Other Sandown selections.

Before getting stuck into tomorrow’s racing I will just take quick look back at some important results from this week’s meetings. The Great Metropolitan Handicap at Epsom went to Sunny Game who is trained by Michael Bell. It was a comfortable victory and Sunny Game looks the sort to win again. Harlestone Times, a winner twice last season came with a late run to finish 2nd but was disqualified and placed third. I think he will also pay to follow this season.

Another impressive winner on Wednesday was Danadana up at Newcastle. This 3 year old looks a very nice prospect and I will be following his progress with interest. Other winners over the last week that have gone into my notebook are Belgian Bill, World Domination, Modun and Dandino. 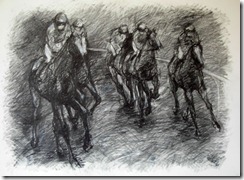 Tomorrow sees the last day of the UK flat season with a quality card at Sandown. The Bet365 Gold Cup (formerly the Whitbread) at 3.10 is the feature. Last Season’s winner Church Island has once again been aimed at the race. He was 4th in 2009 and clearly likes the track. He is 8 lbs higher than when successful last season but he can’t be written off. Faasel is a quirky sort but decent on his day. He was runner up in the Kim Muir at Cheltenham. There are several others with Cheltenham Festival form. Baby Run won the 2010 Fox Hunters, while Poker de Sivola won the 2010 National Hunt Chase. Others with big race form are Gentle Ranger who was 4th in the Midlands National while Maktu was 5th in the Welsh version and they both command respect. Briery Fox would have won this race two years ago but for an inspired ride by AP McCoy on the winner. The horse is 13 now but not out of it. On the stats side 7 of the last 10 winners have been priced at 10/1 or bigger and only two have carried more than 11 stone.

The two I will put forward are Aimigayle, 2nd in the Byrne Group Plate and Meanus Dandy, winner of the Badger Ales at Wincanton. They should both handle the ground.

Cityscape is a horse to follow on the flat this year but he may find the ground a bit quick in the 3.45 at Sandown so I will side with Mick Channon’s Music Show. Elsewhere on the Sandown card I like Afsare in the 4.20 and Treble Jig in the 4.50.

At Musselburgh my selections are Glen’s Diamond (3.05) and Striking Spirit (4.15)

My thanks to Sue Malkin for today’s picture.

ahorse
Create a free website or blog at WordPress.com.