Just a couple of suggestions for tomorrow’s racing.

At Brighton in the 4.30 Chris Wall’s 3 year old Azaday has been knocking on the door and should go close.

At Kempton in the 8.20 Bramshaw, a winner of his only start so far is very well thought of by his trainer and could be something special.

Starting at Leicester tomorrow Sleeping Wolf should be all the better for his debut run at Salisbury and could be a threat in the 2.10. Of the newcomers Dumbarton is interesting on breeding.

House Point represents a capable but unfashionable trainer in the 3.10. He has shown some promise in maidens and could be value.

Star Rover has been running well enough but is just too high in the handicap. The conditions race at 3.40 could be an opportunity for him.

Miss Villefranche comes from a winning family. If all 8 stand their ground in the 4.10 she could be a value each way bet.

My only selection at Ripon is Fastnet Storm in the 3.30. I note that the stable had a winner today with My Single Malt.

Lastly, there were good reports about Tiberius Claudius earlier in the season although he made no show when unfancied on his debut. He runs in the 6.25 at Folkestone tomorrow and any market support should be noted.

Today’s picture is courtesy of the artist Sally Martin

I have often extolled the virtues of Steve Taplin’s annual publication detailing the latest crop of 2 year olds. His annual includes a list of 50 to follow which are well worth keeping an eye on during their juvenile season and beyond. Today was a case in point as both Tropical Paradise and Swiss Diva, from the 2008 “fifty” were winners. Tropical Paradise won the Group 3 at Goodwood where another from Mr Taplin’s class of 2008 Himalya was 3rd. Tropical Paradise is becoming something of a Goodwood specialist as this was her 3rd win at the Sussex track this season. Swiss Diva’s win at Deauville was her second at the French course.

There is the usual plethora of bank holiday race meetings tomorrow but in the main not a lot of quality.

Oldjoesaid continues to slip down the handicap. He runs in the 3.10 at Epsom tomorrow where first time blinkers may have the desired effect.

Cosmic Sun and Cool Strike are my two against the field in the amateur riders race at 4.20.

Things have to drop right for Webbow but I still believe he has a big field handicap in him. He has the ideal partner tomorrow in the Ripon 4.10 where Kieren Fallon rides him for the first time. In the same race San Cassiano cannot be ruled out despite having risen in the weights.

In the 4.30 at Warwick Act of Kalanisi is narrowly preferred to Mykingdomforahorse.

There will be a big crowd at Cartmel races tomorrow.  I wonder if they will be treated to another dog on the racecourse?  My thanks to Dan Maudsley for the photo.

With the news that Bated Breath has had an injury scare his price in the listed race at Newmarket now looks short enough.  This is quite a tough race to predict but with doubts over Bated Breath,  Dafeef and Mon Cadeaux are the pair I would probably go with.  It is a shame that Mon Cadeaux is the Pricewise selection as that will shorten the odds.

I will stand by my other selections from last night’s preview.

Enjoy the day.  I am off to the Moss Rose hoping to see Macclesfield Town gain their first league win of the season.

The going could play a significant part in the racing tomorrow with a fair amount of rain about in some parts of the country.

Starting at Beverley Mark Johnston has an interesting runner in the 2.25 in Guest Book. He won his maiden at Chepstow before finishing 2nd in an Ascot nursery. A handicap mark of 83 looks reasonable and he should have scope for improvement. The fact that he has not starting his 2010 campaign until now is a slight worry but hopefully he will be in tip top shape and raring to go tomorrow.

The 3.00 looks competitive and I have rather a lengthy short list. Spoken is going for a hat trick after wins at Bath and Nottingham but has gone up 10 lbs since his last success. Up until now he has shown his best form on fast ground. The lightly raced Lucky Windmill won on his seasonal reappearance at Pontefract and should be open to further improvement as he tackles a longer trip here. Bonfire Knight comes into this on the back of 2nds at York and Doncaster and is weighted to be in contention. Medicinal Compound won a Redcar maiden last October and had his first run this season at Ripon last week where he was only beaten a neck after finishing strongly. Layla’s Dancer has been running consistently and comes here on the back of a decent 3rd at Haydock. Some ease in the ground would help his chance.

This is a wide open contest and there are some interesting prices on offer. Medicinal Compound at around 10/1 would be my suggestion.

The Beverley Bullet at 3.30 could suit the Dandy Nicholls runner Masta Plastawho is ridden by son David. At a bigger price Anglezarke would be interesting if recapturing last season’s form.

Goodwood next and there is always the chance that Mata Keranjang could go on to better things now that he has finally won a race but in the opener at 2.00 I slightly prefer the course and distance winner Suruor. I always like course form at the unusual Sussex course.

Drunken Sailor deserves to get his head in front and the 2.30 looks a reasonable opportunity for him. My only selection at Redcar is Tim Easterby’s Escape Artist in the 7.20.

At Newmarket I am quite keen on the chances of Codemaster in the 1.45. He was runner up at Salisbury on his debut and the winner has since gone in again.

San Cassiano has done really well for me already with 2 wins at big prices but he has gone up in the weights and think I will pass him by in the 2.15. Leviathan should be all the better for a recent run on the all weather and given his largely progressive form last season he looks to have an each way chance.

In the 3.20 Rodrigo De Torres drops back to 6 furlongs for the first time since his 2 year old campaign and could be interesting. It is however possible that a race over course and distance earlier this month may prove the key to this contest. Dafeef won on that occasion with Bated Breath a close up third. Given the way that race was run Bated Breath may be able to turn the tables here and he gets the selection. Cheverton will appreciate the ground and from his current handicap mark will be hard to beat in the 4.30.

At Windsor in the 6.10 it is hard to choose between Traffic Guard, Bullet Train and Kingdom of Fife. Course and distance winner Traffic Guard will handle the ground and looks the percentage call.

I am going to give Distant Memories another chance in the 6.40. He has not really lived up to expectations this season but he will like the soft ground and at 11/2 could be value.

Today’s picture is courtesy of the artist Sue Malkin.  Follow the link below for further information about this artist.

There are just 4 horses on tomorrow’s cards that catch my eye.

At Bath Raktiman runs in the 5.45. He won for the first time at this track last month in a pretty mediocre 4 runner race. He is a scopey sort though and now he has got his head in front he could go on and win again. He was second on his only other visit to Bath so clearly he is suited by the course.

Dandarell was 3rd at Southwell last month and showed enough there to suggest he has a race in him. I hope it will be in the 7.05 at Hamilton tomorrow! 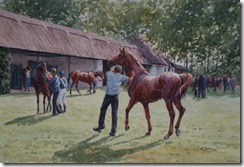 The well related Traffic Sister ran well on her debut at Newbury. A big sort that should improve for the run she is my selection in the 2.20 at Newmarket. I thought Precision Break put in his best effort for a while when 5th at Chester on Saturday and I am hoping he can build on that in the 4.05.

Today’s picture is courtesy of the artist Katy Sodeau.